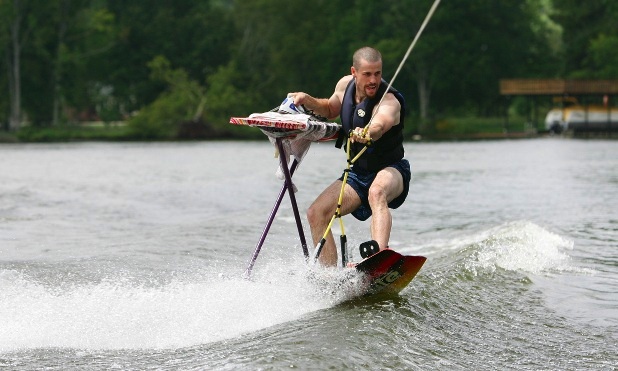 5 weird but funny sports you haven’t heard of!

Tired of always doing the same things? Take a look at this list of unusual sports brought to you by the Hypefive team!

You might be surprised at just how much you don’t know about sports. Everyone has heard of typical disciplines such as football or running; but what if we told you there are dozens of other sports you can try that most people haven’t even heard of?

Just because a sport is unusual doesn’t mean you shouldn’t give it a try. If you’re feeling adventurous, finding a new discipline can mean getting away from soccer or baseball and into the realm of underwater hockey, extreme ironing or even Quidditch!

The concept of what constitutes a sport is a constantly evolving one. In the past century, extreme sports such as snowboarding and skateboarding have made their way into the mainstream. In the same way, some people may think the disciplines in our list aren’t real sports because they are unusual in comparison to more traditional ones. However, many believe these unusual disciplines are just as valid as any other, more stablished sport.

Curious to find out more? Here’s our list of the top 5 weirdest (but totally worth a try) sports in the world!

List of the 5 best unusual sports in the world

Quidditch was a popular sport played by wizards and witches in the Harry Potter series. In this story, the main characters flew in magical brooms and had to score points by getting different kind of balls through the rival team’s goalposts, besides other complicated, weird rules you are probably already familiar with.

However, did you know there’s a non – magical version of Quidditch you can try? Muggle Quidditch was developed at the Nottingham University in England. It is a form of «Quidditch» played by people who do not possess magical abilities.

The game is a lot like dodgeball. The objective of Muggle Quidditch is to score points by throwing a ball through the opposing team’s three scoring hoops. Although it’s a pretty new discipline, it’s increasingly becoming popular with university students and adults alike as it’s cheaper than other mainstream sports like football or basketball and it doesn’t require much equipment. It’s also a pretty easy sport to get into, although getting really good at it can be quite complicated!

This sport originated in Southeast Asia and involves players kicking a ball through a series of hoops using only their feet. It’s played by two teams who compete against each other to score points by hitting the ball through the opponent’s goal. The game is similar to soccer, but it’s much more physical than that sport.

The sport was created by two Malay men who were playing football on the river banks of Singapore in the early 20th century. They found that the football would not travel well on sand so they substituted it for a long, plaited rattan ball that could be kicked easily.

A lot of people call this sport «kick volleyball» due to the fact that there’s a net separating both teams. However, it is much more physically intense than volleyball and can seem more similar to soccer in many ways.

Unusual sports are not land locked. There are a number of aquatic sports that you might not have heard of. One of them, and probably the most famous one, is under water hockey.

Also called «octopush», underwater hockey is a global game where players propel a small puck through water using a tiny hockey stick. One of the biggest challenges for the player is that they cannot use any kind of device breathing device during the gameplay, which means they need to go back to the surface repeatedly during a match.

In 1954, Alan Blake invented octopus underwater hockey (also known as «octo» or «Octopush») for his new sub-aqua club at Southsea, Hampshire, UK. It became an instant hit among divers who were bored during their winter break from scuba diving.

After some time, the sport spread across Europe and eventually throughout the rest of the world. Today there are several hundred clubs playing under water hockey rules. There are two major tournaments per year – one in North America and another one in Europe.

Unusual sports also don’t have to be safe or played with teammates. One of the most extreme unusual disciplines is Zorbing, which involves being strapped into a giant ball and then rolled down a hill. The sensation is described as being similar to jumping on a giant bouncy castle, except it’s not quite so safe…

Generally, zorbing takes place on a gentle slope but may also take place on a flat surface, allowing for greater rider control. If there aren’t any hills nearby, then an operator may construct an inflatable ramp, wood ramp, or metal ramp in order to get a «launch pad» for the giant ball.

There are different levels of zorbing, and although it’s usually considered an extreme sport, it can also be turned into a relaxing activity if performed on a mass of water. This version of the discipline is known as «water walking», and involves moving around a pond, lake or pool while inside a zorbing ball.

We couldn’t wrap up our list of unusual sports without mentioning one of our all time favorites: extreme ironing.

Also know as EI, it’s an activity where participants use large ironing boards to iron clothes at remote sites such as mountainsides, cliffs, beaches, etc. As per the Extreme Ironing Bureau (EIB), extreme ironing is “a new dangerous sport combining the thrill of an extreme outdoor activity and the satisfaction of a perfectly pressed shirt”.

One part of the appeal for the media toward extreme ironing seems to be centered on the question of whether it is actually a sport or not. Most people think it’s actually a joke discipline; but don’t let that keep you from trying it!

There are several places where people perform extreme ironing feats. These include mountain slopes, forests, the bottom of the ocean, ironing while skate boarding or surfing… Human creativity knows no limits, and this very unusual sport is one of the best examples of that.

Had you ever heard of these uncommon sports? In case you want to try any of them, Hypefive’s app is one of the best places to actually find your next partners in crime! Make sure to download the Beta and take the first steps towards that new hobby or fitness challenge!